【The iPhone- vibe accessory that does what Apple does not】

We all have certain calls we want to keep and revisit, whether it be your grandma’s secret cooking recipe, or an important business call. For whichever reason, we all agree some conversations are worth archiving. This is why we introduce Magmo, Snap-On MagSafe Call Recorder, with the hope of relieving some burden of phone calls for everyone.

*If your mobile phone does not have the MagSafe function, you can choose the MagSafe sticker combination to use Magmo normally!

▼Can record clearly even in noisy environments 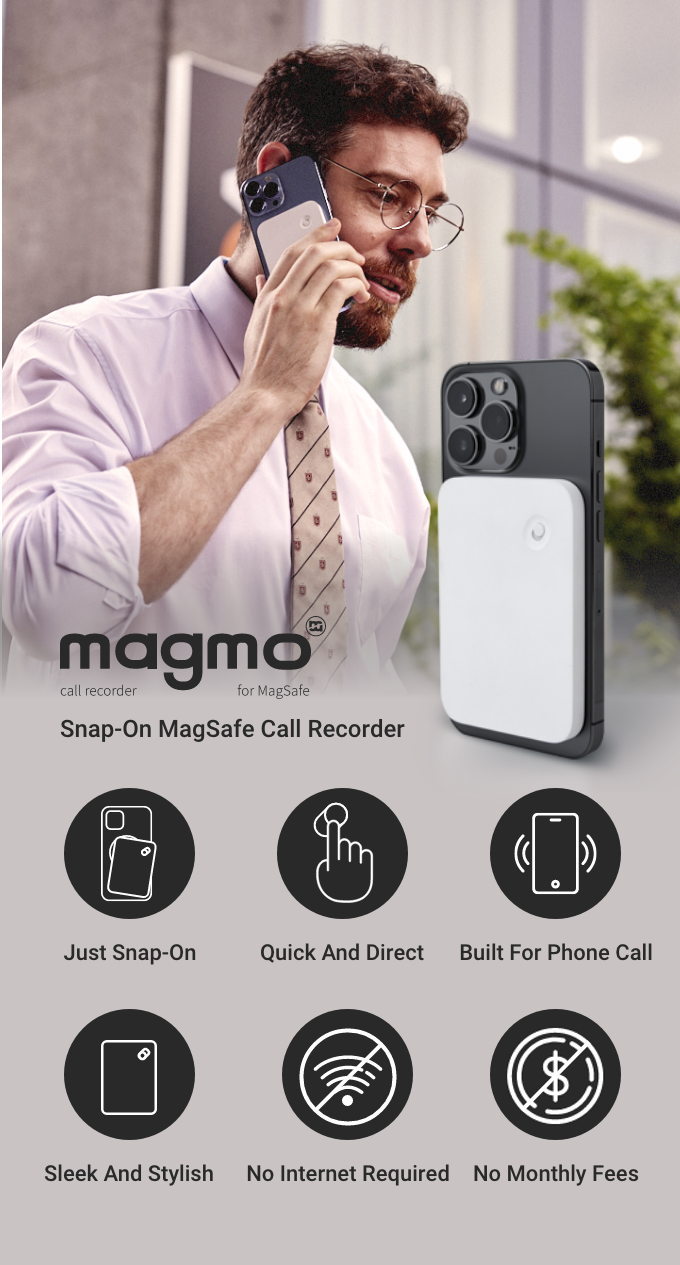 Whether it be your grandma’s secret cooking recipe, or an important business call.

Or it may be something not this complicated: detailed information passed on over the phone in a jiffy that is just too long to remember, or your day could just do without the burden of remembering every phone call. 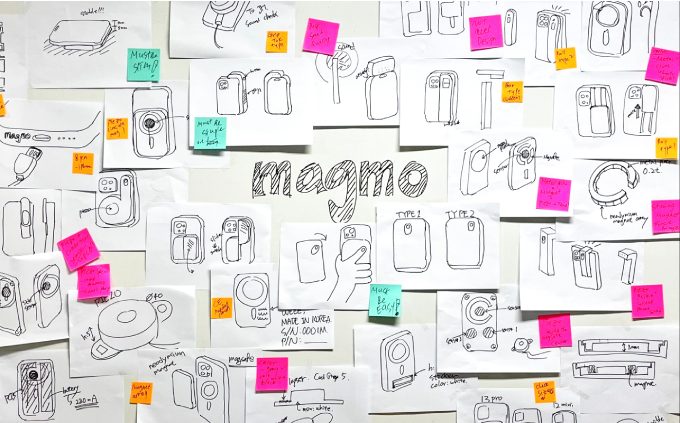 One year ago, we launched BUZZ Light with hopes to aid workers in face-to-face conversations. BUZZ Light was designed to record workplace harassment, but we quickly realized it had more practical uses from customer reviews.

On this note, we decided to supplement practicality to more conversations in workplaces. 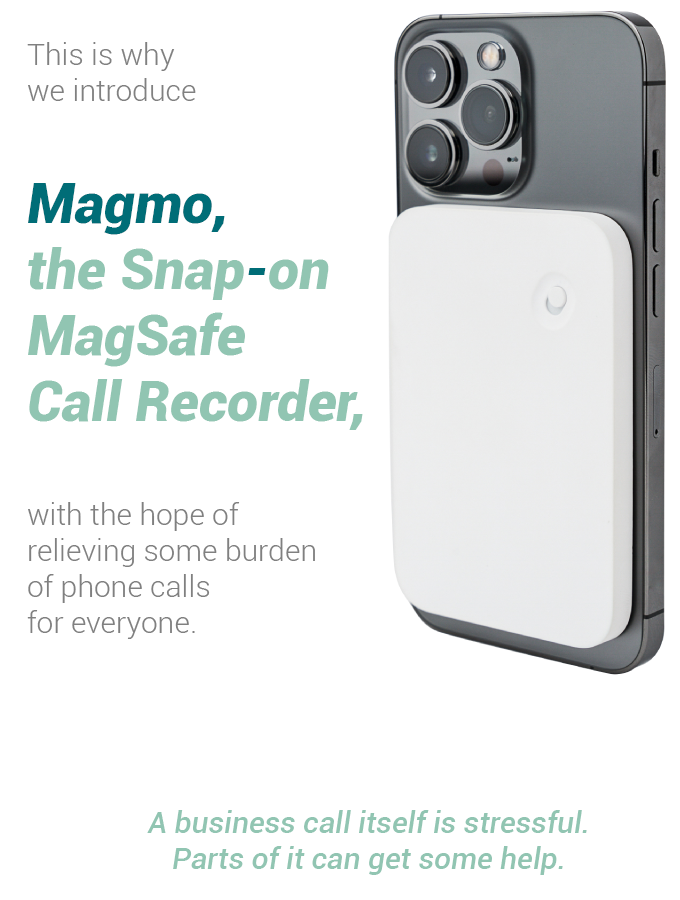 Before anything, the call recording process had to be simple.

The never-ending advertisements, credit purchases for record minutes, and two-way calls are steps that rather add work to the user. 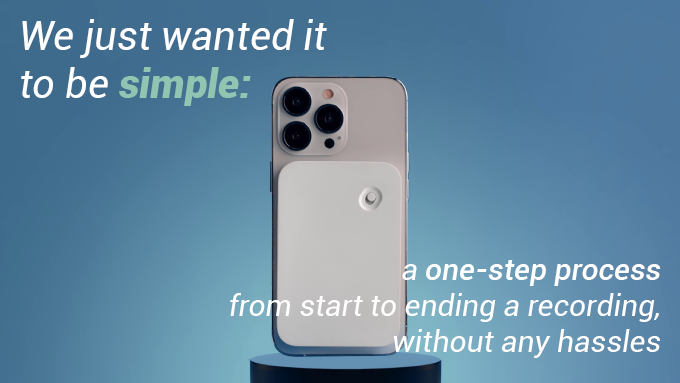 Our strive for simplicity did not end in Magmo’s software. We wanted Magmo to not only work simple, but to look simple as well. Benchmarking Apple’s and iPhone’s clean design, we chose a pattern-less white exterior for Magmo.

This way, it would seamlessly snap on to the back of any phone. 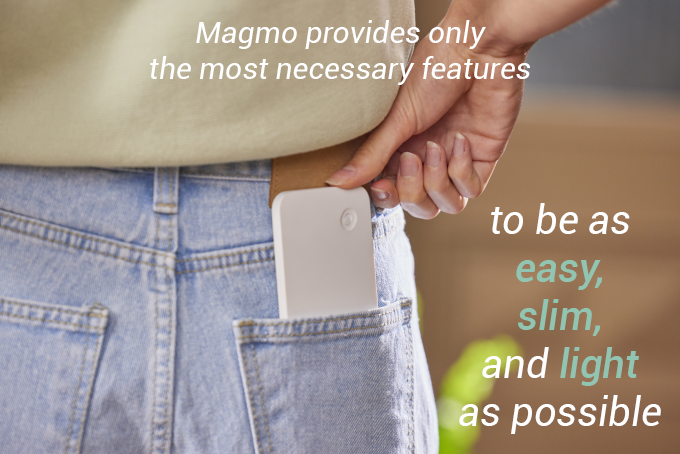 I mean, who would hate a white, 7mm, and rectangular magnetic accessory with curvy edges?

I wouldn’t, for sure.

And with the power button right where your index finger is located while calling?

It’s specifically designed for MagSafe, compatible with iPhones. And also available other phones with magnetic ring.

Simply slide the button up when you need to record a call. Magmo immediately starts recording, without any hassles.

When you’re finished, slide the button down and the recording stops.

This unique technology effectively cuts down background noises, so you can clearly play back your conversations with minimum interruptions. Moreover, the recordings are saved directly onto a hard drive, so all your personal calls will be stored safely without the risk of losing data.

To tackle the problem that users cannot record calls on iPhones, Magmo was developed with the iPhone in mind.

The goal was to resemble iPhone’s clean and trendy design but to minimize the add-on’s presence.

Magmo directly captures the conversation without any complicated requirements such as, not having a stable internet connection, or having to go through third party calls, or two-way call features within the app.

Untill your call ends, Magmo will record everything, by itself.

It can especially be overwhelming for those who feel the need to have to record their phone calls.

Imagine if your recording was cut off due to insufficient funds or due to a late subscription payment.

However, with Magmo once you make the purchase, that’s it.

We positioned a piezoelectric element in the center of the MagSafe magnet to maximize transferability.

This position showed best responses in our internal tests, compared to elements positioned elsewhere. Hence, Magmo’s piezoelectric element can perform best and capture the most of the conversation for the best recording.

Magmo comes with a 32GB storage space in which you can store up to 500 hours of recording files.

This storage space can also store your other files (e.g., .pdf, .doc) to assist your work.

Magmo is compatible with Apple’s 8 pin lightning cable for you to not carry a separate charger for it.

The package comes with an 8 pin to A cable to connect to your PC to check the files.

An LED indicator next to the 8 pin port of Magmo will tell you the battery level and the recording progress.

It turns on while charging, and when you start and end recording.

Condenser microphone, the most common type of microphone, detects sound in the air.  Applied to phones, precedent microphones received sound waves via diffraction of sound waves coming out of speakers’ mouths. Capturing the speaker’s voice might not be too much of a problem, but the sound from the other end is.

Sounds emitted from the ear speaker are too small for the recorder to pick up, unless it is right on top of the speaker (as the figure below).

In our product design stage, we tried to solve this problem by positioning the condenser microphone on the top of the phone or overlapping it with the ear speaker. However, other problems arose, not to mention their poor design.

All our problems were solved with the piezo sensor. A piezoelectric element reads sound waves transmitted through solid contact, in our case the iPhone.

We positioned it on the rear surface to read the vibrations transmitted through the phone’s interior. This solution equally captured both sides of the calls well while diminishing background noise. In addition, a piezoelectric element can be installed anywhere as long as a surface has free space the size of a bottle cap, so the product was able to improve aesthetically.

The Magmo package contains these components.